Ashta Chemicals was built in 1963 and currently manufactures chlorine and potassium hydroxide.

We are currently investigating claims of potential Mercury contamination to both people and property. Throughout this plant's operation over the past 6 decades, tons of liquid mercury were utilized to create chlorine. Only recently has the plant converted to safer technology that does not utilize mercury in the production process.

For most of the operational history of this plant, hundreds of workers have been exposed to mercury, not only from working at the plant, but also from worker's bring contaminated clothing and materials home to their families.

Most, if not all, of the plant's chlorine is sold to nearby Millennium Chemicals, to aid in manufacturing titanium dioxide, a white-color enhancer and common ingredient of sunscreen and cosmetic products. Potassium hydroxide (also known as caustic potash) may be used to manufacture detergent, fertilizer and many other products. Two of Ashta Chemicals' domestic competitors, which also produce potassium hydroxide, have already modernized their plants with mercury-free chlor-alkali technology. This technology neither uses nor emits mercury and reduces energy costs as much as 37 percent. For some chlor-alkali manufacturers, this mercury-free technology has paid for itself within five years, by reducing operating costs.

A number of investigations and reports have confirmed that large amounts of mercury have migrated outside the industrial processes at Ashta Chemicals. This has occurred through releases into the air, the physical leaking of mercury into the soil, and mercury being washed into drains or ditches during plant cleanups. Additionally, workers contaminated from working in the plant took materials off-site via contaminated clothing, vehicles, and materials. Throughout the plant's history, there have been numerous articles and reports detailing just how much contamination occurred. This likely has been ongoing since the early 1960's when the plant was opened.

In 2010, for example, Oceana gave a Press Release after examining findings of the Ohio State EPA, which may be found HERE. The EPA records revealed that in 2009 alone, at least 415 pounds of mercury were missing from Ashta Chemical's on-site inventory. Thie "lost" mercury, was released into the environment through means uncontrolled by Ashta Chemicals. The most common pathway of mercury release from plants is into the air. The press release states that "it's likely that much, if not all of this “lost” mercury was emitted into Ohio's air. For the past three years, Ashta Chemicals reported to the U.S. EPA that it emitted no fugitive mercury into the air. Oceana challenged these findings with its own air monitoring, which suggested the plant was in fact emitting mercury, and those findings are corroborated by the company's report to the Ohio EPA.  These reports reveal that the company has carelessly handled and tracked its toxic mercury, which threatens public health."

Other findings from the report include that:

This is just one of many reports, investigations and studies, evidencing mercury releases from Ashta Chemical's plant in Ashtabula, Ohio.

You can see in the below diagram, just how extensively mercury releases affect the environment. 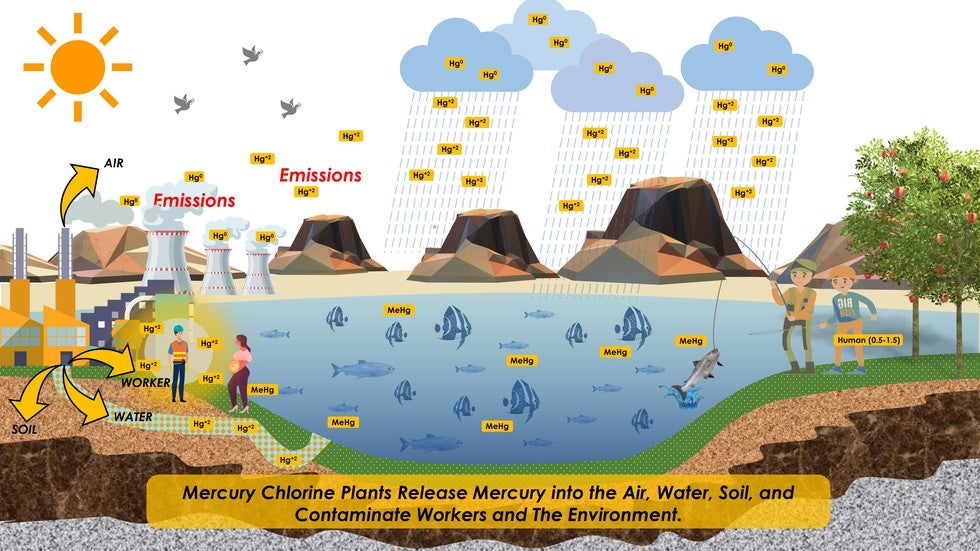 Throughout this plant's site history, a number of different companies have owned, leased, and operated the site located at 3509 Middle Rd, Ashtabula, OH 44004. These companies may include, but are not limited to Union Carbide, Detrex, Sobin Chemicals, Mallinckrodt LLC, IMCERA Group Inc., International Minerals & Chemical Comapany (IMC), Linchem, and finally Ashta Chemical which became a subsidiary of BigShire Mexico in 2011.

Our preliminary investigation shows that in addition to plant employees, a number of different contractors worked at the site and may have been exposed.

The preceding is provided based upon information that is that is currently available. Research has been conducted to verify these allegations. Many of these allegations are denied by Ashta Chemicals.

Our project at this site, endeavors to explore the extent of contamination and toxic releases and establish the extent of physical and mental harm caused to plant site workers, their families, the population of Ashtabula, Ohio and the surrounding communities.

Please contact us if you think you or a member of your family may have been affected by exposure to mercury from the Ashta Chemicals plant in Ashtabula, Ohio.

Thank you for contacting us. We will get back to you shortly.

Please complete all required fields below.

Joey James Law is committed to answering your questions about Toxic Torts and Environmental Law issues across the country.

We'll gladly discuss your case with you at your convenience. Contact us today to schedule an appointment.